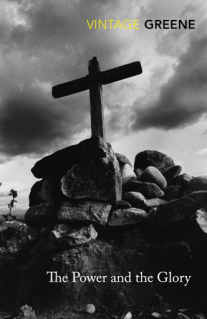 The times are hard in the 1930s for catholic priests. The protagonist has to hide from the police hunting for representatives of the now forbidden church. He is no perfect, humble servant of God – he drinks, even has a daughter and knows when to look away. Nevertheless, he fulfills his duties as a supporter of his parish and people risk their life to hide him. But the situation gets more and more troublesome when the police start taking hostages to force the people to sell out the priest. In the final confrontation between the priest and the lieutenant both have to acknowledge that they are not that different from each other.
The basic topic was a reality in Mexico, Tomas Garrido Canabal tried to shut down all churches in his province of Tabasco. Since I am not all too familiar with Mexican history I can hardly understand how all this could happen, but since the Catholic belief came with the settlement of the Europeans and obviously suppressed traditional cults, the hatred can easily be understood. So in a way, this novel could be read as a kind of colonial story and since both sides are neither only good or only bad, we also get a differentiated view on a complicated situation. However, the title suggests that the church’s position might be the one to survive and to be stronger, since it clearly alludes to the end of the Lord’s prayer: “For thine is the kingdom, the power, and the glory, forever and ever, amen.” To me this is definitely one of the best of Graham Greene’s novels since it is less political and much more based on personal conflicts than other novels I have read of him. This personal perspective of the priest but also the people he meets gives a deep insight in how the people feel and what counts in life in the end.